FOR CLEANING THE AIR WE BREATHE

We will measure air quality in your office, home, or any other location.

Based on the results, we can recommend options for how you can improve the air quality in your surroundings.

FOR PREVENTING THE SPREAD OF VIRUSES SUCH AS COVID-19

FOR PROTECTION OF MEDICAL STAFF AND PATIENTS

FOR EASY REMOVAL OF GRAFFITI

FOR COOLING THE PLANET

FOR WATER CLEANING AND CHEMISTRY REDUCTION

FOR PROTECTION AGAINST MOLD, ALGAE AND DIRT

What is FN® Nano Coatings?

FN® Nano coatings are intelligent multifunctional coatings using photocatalytic nano technology to eliminate odors, allergens and toxic chemicals from the air and to effectively prevent occurrence of viruses, bacteria and other organisms.

When used in medical facilities, schools, and public buildings, FN® eliminates spread of infections, create a healthy environment and purifies the air.

When applied on roofs, FN® creates a thin layer that reflects sunlight and reduces heat transference.

FN® Nano coatings can be effectively used as a protection against graffiti. Graffiti sprayed on FN® coating layer can be easily removed with high-pressure water hose without any damage to the underlying substrate.

FN® Nano is in compliance with Canada legislative requirements. 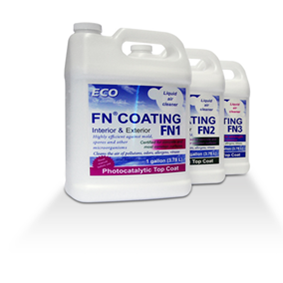 Pure titanium dioxide (TiO2) is a fine, white powder that is widely used in many consumer products including cosmetics, toothpaste, food coloring, pharmaceuticals, and sunscreens. TiO2 is one of the most common minerals on the planet.

Titanium dioxide is approved by the Canadian Food Inspection Agency on the basis of Reference Listing of Accepted Construction Materials, Packaging Materials and Non-Food Chemical Products.